Sanitary drinking water is often an under-appreciated necessity that many of us take for granted. If you’re use to having well water, or a fresh spring nearby – you probably never need to consider any measures to purify what you drink from day to day. But if your future plans include traveling to other countries, going on a weekend wilderness hike, or even going to visit your in-laws – it may be wise to consider some potential ways to safeguard your gut from foreign matters of bacteria, viruses, and animal droppings.

This is something my wife and I take into consideration when traveling to areas of the world where sanitary drinking water isn't readily available. And while there were times when we simply said a prayer and acted on faith without any precautions (as we do when offered a customary beverage when entering into someone's home) – we were relieved to have a way to sterilize what water we drank while on our own. 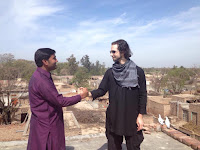 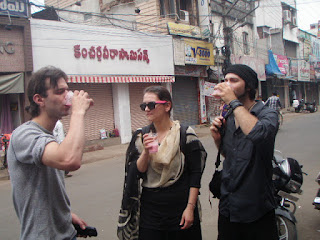 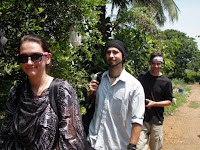 To sanitize water, you can boil it, treat it, distill it, and filter it; however, you might not be able to fit or smuggle all the necessary tools into your backpack. Of course even if you are prepared, you should always expect the unexpected. That's why we carry the SteriPen UV Water Purifier with us. 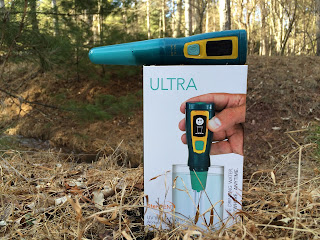 The SteriPen Ultra is a newer, updated design to some of the previous models that we've used.

-kills 99.9% of bacteria, viruses and protozoa in water
-treats 50 liters of water per full charge
-treats in as little as 48 seconds
-usb rechargeable
-8000 treatments per lamp life

The SteriPen Ultra is very simple to use. Simply press the on button of your charged unit, and place the bulb in your 1 liter water container and stir. The indicator display on the SteriPen will alert you of the status of the treatment, and the lamp will automatically shut off once finished. A typical treatment takes anywhere from 48-90 seconds depending on clarity and volume of the water. As shown in our video demonstration, the display will also alert you as to the battery life and lamp life of the SteriPen.

Replacement Pledge from SteriPen.com :
After purchase from an authorized reseller, register your SteriPEN at SteriPEN.com/register. Reach the lamp life limit (8,000 treatments) and we’ll replace it with a new SteriPEN!

As stated above, we've used two SteriPen UV lamps for years in both our domestic and international travels. We've even drank water from known hazardous sources (advised against us by the locals) and never fell ill!

However, one should be cautious as to handle the SteriPen's bulb with care and to put the protective cap back on once finished. You should also be mindful of the container that you use – and if you are dipping it into an unclean water source (like I did in the video demonstration) to pour that into a clean container before treating OR to clean the rim of the container before consuming. Common sense and vigilance always apply when safeguarding your health! The SteriPen Ultra will indeed do what it promises, but it will not filter sediment or particles from the water that you sterilize.

It is recommended to use the SteriPen along with a filter bottle if the water contains possible contaminants.

Disclosure: Work'n Man's Life received a sample SteriPen Ultra from SteriPen for this review. The opinions expressed in this blog are solely those of the author and have in no way been influenced by or reflect those of SteriPen.

A 6-string banjo allows a guitar player (who may lack the time or discipline to roll with a 5-string) the means to produce that envied mountain sound. This video is a brief little demonstration of the 6-string banjo I purchased some years back: the Oscar Schmidt OB6.

This banjo can be tuned standard guitar tuning (EADGBE), and can be strummed & plucked like a guitar - or you can use finger picks if you wanna tune it open and play with rolls.

Wouldn't it be nice if there were a way to convert wood-stove or campfire heat into electricity for phones or other USB appliances? We thought so! Our research on thermoelectric generators (TEG's) led us to a few available products in the online market, including the BioLite -and a few other slapped-together peltier module units. Initially, the BioLite seemed like a neat idea, but what about for indoor use too? After this previous blizzard knocked the power out at our main cabin, the novelty of a TEG seemed to transform into something more practical. And that's exactly where I'm headed....

Our search led us to the PowerPot V, made by PowerPractical.

Simply stated, the PowerPot V (when filled with cold water) generates 5V of up to 5W at 1A electricity using heat from a stove, campfire, or any significant heat source. (great for charging phones, mp3 players, usb battery banks, led lights, and other usb powered devices)

The PowerPot uses the temperature differential between cold fluid and a heat source to generate electricity. As we confirmed during our use of this product, the colder the liquid and the hotter the fire (or greater difference between the cold and heat) – the more charge is generated. The PowerPot charge controller will fluctuate between 1W and 5W of power depending on this temperature difference. We've been using snow and cold stream water so far, and both those seem to work best for us (usually around 3W).

The included instructions provided a basis of information as to how to properly use and operate this device for maximum efficiency. A more thorough explanation “how” thermoelectric generators work can be read at this page on Power Practicals website: https://powerpractical.com/pages/how-do-thermoelectrics-work

Because the difference between hot & cold temperature is required for operation, the water in the PowerPot needs to be replaced with fresh cool water after it comes close to boiling.

As shown in our demonstration video, the PowerPot will generate electricity fast when used according to the manufacturer's operating instructions. The PowerPot can be used on virtually any heat source, but should not be engulfed in flames. While the unit and cords are “heat-resistant” they are not fireproof. The PowerPot also needs to be handled with care as to not damage its internal components from temperature shock after use. This means allowing a proper “cool-down” period after removing from the heat source.

With that noted, we opted to break the rules and see what this unit can really handle! ;)
Against the manufacturer's recommendation, we made ourselves a little direct flame campfire out in the snow. We engulfed the PowerPot V in flames while feeding it fresh snow. Immediately upon setting the snow-filled pot on the flames – we had 3W of power to my iPhone. I continued this Xtreme element test for about 20 minutes, feeding the pot with fresh snow when the charge would drop to 2W – and mindlessly removing the pot from the flame and setting it on an ice cold rock >>>NOT RECOMMENDED.

Besides some intense soot buildup on the bottom of the pot unit, everything remained functional (however, I have no way of knowing how much -if any- damage I may have incurred on the internal components of the PowerPot by abusing it like this).

The PowerPot V is precisely what I had hoped it to be for being able to take heat from my wood stove and generate a charge for my USB devices. While some might be offset by the price (direct from PowerPractical at $99), it certainly is a practical tool to have handy for these winter weather power outages, as well as a way to keep one's usb devices charged when off the grid or while camping. And after this recent blizzard that left 3ft of snow and regional blackouts in our area, I'm glad to have this PowerPot standing by.

Disclosure: Work'n Man's Life received a sample PowerPot V from Power Practical for this review. The opinions expressed in this blog are solely those of the author and have in no way been influenced by or reflect those of Power Practical.
Posted by Miaeh at 6:07 PM No comments:

How to restore a cast iron skillet.

Did you know that Black Walnut trees can be tapped, and YES - used to make delicious syrup?
While the yield isn't as impressive as the beloved Sugar Maple, the sap of a Black Walnut can be just as rewarding an effort to harvest & introduce into your culinary endeavors.

This step-by-step instructional can help get you on your way to tapping your own Black Walnut trees!    (click the photo below!) 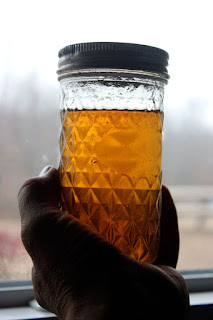