So we just got in this neat new product called the 'Kindling Cracker.' Invented and designed in New Zealand, it makes splittin your kindlin quicker, safer, and easier! (as advertised on the packaging) 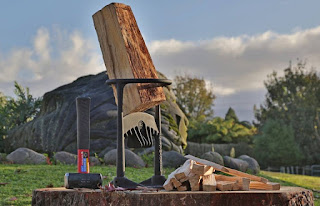 UNBOXING:
The first thing we noticed upon unboxing it was the sturdy steel construction. It's certainly solid, yet just light enough to pick up and move with ease. The base of has two holes drilled opposite across the diameter, which allow you to screw, bolt, or nail the cracker down. Though this is ideal for keeping the cracker still while using, we demonstrated it without being fastened down.

This cracker was designed to provide a safer method for splitting your kindling; and as we found - it is just that! The inverted bevel allows you to bring the kindling square down on the axe instead of bringing an axe down on the kindling - thus preventing potential cut injuries to your hands and legs. 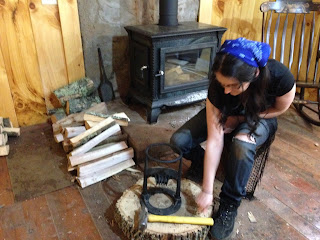 APPLICATION:
While the Kindling Cracker certainly does make a quick and painless job of splitting the intended seasoned firewood chunks, we decided to put it through our doomsday test and throw the book at her! (or in this case, the whole forest and woodshop...lol) While this product is not officially intended by its creators to split actual logs; we found that it's capable of just that!

With a little elbow grease and the sweat of a work'n wife's brow, this kindling cracker even split unseasoned ash! Off the camera, we went on for a total of 8 ash logs -the biggest that we could fit in the cracker- and it held up strong through it all.

(NOTE:  This product is intended to split your standard seasoned firewood into kindling. We have been using it for logs too; but please use as instructed from the manufacturer so as to prevent any damage to the product.)


The Kindling Cracker is available for order online at Northern Tool or at the Kindling Cracker website. This tool would make a fine present for anyone to keep by their woodstove or campsite, and for shaving some time off those cold mornings when first getting the fire going!


Disclosure: Work'n Man's Life received a sample Kindling Cracker from Northern Tool for this review. The opinions expressed in this blog are solely those of the author and in no way reflect or are implied to reflect those of Northern Tool.
Posted by Miaeh at 2:27 PM